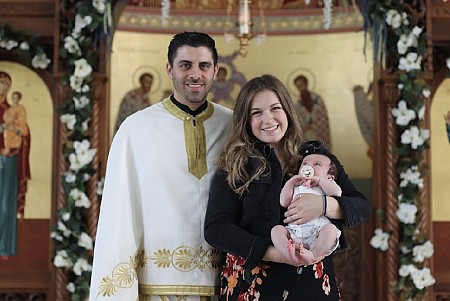 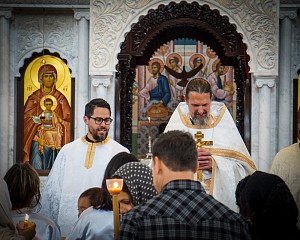 I would like to share a little about myself, how I became an Orthodox Christian priest, and how I came to serve as Pastor here in St George, Utah.

I am a native Southern Californian. I was born in West Covina, California, in 1984. My first real exposure to Christianity came from attending an evangelical mega-church in my hometown, Riverside, California.

After I successfully completed high school in 2001, I attended college locally (a block from my house) at California Baptist University, graduating in December 2007 with a Bachelor of Applied Theology. In 2003, I met the beautiful young woman who would become my wife while working at a local seafood restaurant. We married in 2004.

I encountered Holy Orthodoxy the summer before I graduated from college while reading a book. Historically curious, I began to do some research into the Orthodox Christianity. Discovering the Orthodox Church was a Herculean event in my life; I slowly began to piece together answers to a variety of questions and inconsistencies that arose as I studied both the Scriptures and the history of the Church.

On a bright fall afternoon during my last semester in college, I finally had an Orthodoxy breakthrough, so-to-speak, as I talked with one of my coworkers, Chad Trenham. I happened to be reading a theological book prior to the beginning of our shift which led to conversation with Chad about the Orthodox Church. He told me his dad, Fr. Josiah Trenham, was the local Orthodox priest and he could probably help me find answers to my questions.

Providentially, the very next week while I was studying with some friends at the university library, I observed a man, dressed in all black, move swiftly through the CBU Library (I assumed, correctly, the man in the black cassock was the Orthodox priest I was hoping to run into). I promptly jumped up and introduced myself to Fr. Josiah. We began to meet regularly for the next six weeks or so until my family and I moved across the country to attend Seminary.

After College, I attended graduate school at The Southern Baptist Theological Seminary in Louisville, KY, where I studied under some of the most influential evangelical and reformed scholars. Fr. Josiah urged me to meet with Fr Alexander Atty upon my arrival in Louisville.

Fr. Alexander was the parish Priest at St Michael the Archangel Orthodox Church; a truly wonderful and holy man. The time spent conversing with Fr. Alexander and watching him pray and serve was invaluable.

Fr. Alexander invited me to attend a service, as, I had not yet attended an Orthodox service. There are not many words I could use to describe the early weekday liturgy for the Three Great Hierarchs; it was truly mystical and transmogrifying. This liturgical experience at the St. George chapel at St. Michael’s Orthodox Church set the foundation for my entire seminary experience. I left liturgy that cold, winter morning with the deep sense of having found the Christianity for the first time.

I decided to used seminary as a platform to compare and contrast what I believed as a Reformed Baptist with what the Orthodox Church taught and believed. After almost two years, I knew that I could no longer, in good conscience, remain a Protestant, and therefore, I decided to become an Orthodox Christian.

My family and I became catechumens in January of 2010 and started attending St Michael’s. Consequently, I switched my degree program from an M.Div to and M.A. so that we could focus on our new life as Orthodox Christians catechumens. I received a Master of Arts in Theological Studies in May of 2010 and my family and I moved back to Riverside, California to finish our catechism and recast our lives.

I needed to do something to support my growing family and so I decided to become a teacher and enrolled in an online credentialing program though the San Diego based National University, my only option while working two jobs. I received my California State teaching credential in 2012 and a Master of Education degree in 2014.

My family and I were baptized on Pascha 2011 at St Andrew Orthodox Church in Riverside, CA. Thereafter, I began serving the church. First, as a bell-ringer and altar server, then as a reader and subdeacon. On July 5th, 2015, I was ordained to the Holy Diaconate. As a deacon, I began to develop a growing love for the Divine Services and a greater desire to serve God. On August 13, 2017, I was ordained to the Holy Priesthood in by the hand of His Eminence, Metropolitan JOSEPH, the Antiochian Primate of North America, along with, His Grace, Bishop IRENEI, the ROCOR Bishop of London and Western Europe.

God graciously blessed me by placing two firmly-fixed and faithful models of the priesthood in my life: Fr. Alexander Atty and Fr. Josiah Trenham. I thank God for them and love them endlessly.

Prior to my assignment here in St George, Utah, I served as an Assistant Priest to Fr. Josiah for four years at St. Andrew. His loving guidance, endless patience, spiritual Fatherhood, and friendship are gifts from God that I, though unworthy to receive them, pray will constantly guide me as a Priest.

In Riverside, I also had a secular job as a teacher for ten years. I taught World History, United States History, and Government and Economics. Teaching exposed me to a wide sample of the where the young people in this country are headed. It clearly provided for me, as a pastor, the significance of prioritizing the Orthodox Christian formation of our youth.

The opportunity to move to St. George, Utah, first presented itself as a potential possibility to my family and I in September of 2020, when, my sisters and I decided to move my dad from Las Cruces, New Mexico to Cedar City, Utah. It became clear in early 2020 that, as siblings, we needed to play a bigger role in caring for our aging, severely diabetic father. One of my sisters lives in Cedar City, Utah, and was in a position to take up the bulk of the responsibility in caring for our dad, but she needed help.

As a public-school employee, the COVID lockdowns offered me the opportunity to spend time restabilizing my father in Utah. While visiting my father, I was able to help assist the Orthodox mission here in St. George. I visited the mission several times, served the Liturgy, and spent time with the wonderful people. I began to pray and ask God, if it be His will for me to serve the community here, to carve out a path, bless it, and to allow me to accept His will for my priesthood. It became clear to me that God was orchestrating these events and calling my family and I to serve the Orthodox mission here in St. George in order to help establish this holy community as a beacon of light in the Southern Utah area.

In August of 2021, I received a letter from my Bishop, His Eminence, Metropolitan JOSEPH, assigning me as Pastor of the St. George Mission in St. George, Utah, and officially began as Pastor with Vespers for the leave-taking of the Feast of the Exaltation of the Precious and Life-giving Cross on the evening of September, 20th.

I am married to a model of selflessness and love, Presbytera Leeann, and have been blessed with nine remarkable children: Natalie, Mary, Ezekiel, Anna, Genevieve, Macrina, Lucia, Isaiah, and Jeremiah.

I am humbled and overjoyed to be the Founding Pastor of St. George Orthodox Church here in St George Utah. It is my prayer and hope that many in this area will want to become participants God’s Kingdom and come to put their faith and their hope in Jesus Christ. If you are interested learning more about the Orthodox Church, want to come and visit us here, or are considering moving to St. George and would like to be involved in a growing Orthodox community please feel free to contact me.